Writing to you now from the Heathrow Airport Central Bus Station with two hours to go before a catch the bus to Bath.

I had thought I would have time to write a bit more after my last post, but planning the specifics of this month abroad has taken up most of my free writing time. Now, however, after many hours of travel that began rather stressfully (I thought my flight left from JFK so I went there, but – oops! – it was flying out of Laguardia! God bless the NYC taxi drivers!), I have arrived. And I’m pretty much rested and relaxed.

So. I’ve got a little writing time…

Here are some of my goals for this trip.  (Yes, I have trip goals — I’m that fussy… — and you can expect blog posts related to them.) 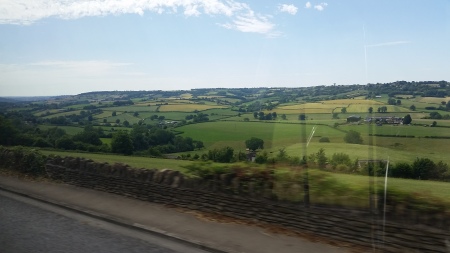 1) First and foremost, dedicating the next three weeks of my life to Shakespeare. Learning his secrets and the secrets of the teaching artists who know how to make his works more accessible to young people. The tentative schedule for the Teaching Shakespeare Through Performance programme* is wonderfully intense – I can’t wait to see the final version in a few days.

Even so, there is a bit of free time, during which I plan to:

2) Make a few literary pilgrimage stops at places relating to Virginia Woolf, T.S. Eliot, Dickens and others. And a bit of historical Nelson/Wellington pilgrimaging, too.

3) Pay homage to my London forebears, both common and royal, especially the Plantagenets.

4) Visit some of the world renowned arts institutions that I’ve somehow never seen: attend a Proms concert at the Royal Albert Hall; finally make it to the National Gallery and the National Portrait Gallery (and not just give them a passing nod as we walk through Trafalgar Square.)

5) Make a day trip to Canterbury and Dover.

6) And before I do any of this, visit my home-away-from-home, Bath. Which is what I’m about to do right now, just as soon as this bus gets here.

Should all be possible, right? Stay tuned!

*I’m never quite sure when to go British or American with spelling as it often feels a bit precious, but since this program is a British one, I figure it’s fair to refer to it as programme without looking like I’m putting on airs.

…you’ve gotta bring your own sun.

WHEREAS today marks the 798th anniversary of the signing of the Magna Carta, and
WHEREAS it is Father’s Day Weekend,
THEREFORE I see it fit to honor a few of my great-great-great…x20…great-great grandfather’s who had some involvement in the Magna Carta’s existence and execution.

I’ve been archiving my family history for enough years and with enough concern for accuracy that I feel comfortable referring to myself as a genealogist, albeit of the amateur, hobbyist sort.  I recently discovered that one of my earliest colonial American ancestors, John Throckmorton (1601-1683), descended from a fairly august lineage that led through a succession of feisty barons straight into the Plantagenet, Angevin, Carolingian and Merovingian dynasties.

That’s over 4 trillion, folks.  That’s a lot of Grandparent’s Day cards.  And it presents a mathematical problem: there were only a couple dozen million people living in Europe during Charlemagne’s day, and if you add up the rest of the population of the Earth at that time it still doesn’t equal 4 trillion.  In fact, if you add up all the people who have ever lived it doesn’t equal that amount.  So that means that those 4 trillion empty spaces on your family tree have to be filled with the same few million people about a million times over!!

And it also tells us that we’re pretty much all related.

Now, having put all that out there, why care about genealogy at all?  Because it’s one thing to know generally that every person with any European ancestors whatsoever can probably trace their lineage back to Charlemagne (and everyone else alive then), but it’s another thing to have names and biographies and marriages — to have specific ancestors to think about who lived in a set of specific dates, who faced the challenges and enjoyed the blessings presented by the circumstances of the world at that time.

Which brings me back to the Magna Carta.

The English baronage in the early 13th century was in revolt against King John.  He was engaged in several battles in France that were draining royal coffers, so he did what governments in need do: he raised taxes (never a popular move).  English possessions in Normandy were lost.  A skirmish with Pope Innocent got him excommunicated.  The barons were not pleased.  Theirs was not the first rebellion against a king, but it was the first where the rebels didn’t have a replacement king in mind, so the result was that the king was not dethroned, but his powers were diminished.  This gave rise to the kinds of parliamentary governments so familiar to the world today, which is one reason the Magna Carta is historically relevant for the entire world.  According to the British Library, most of the clauses of the Magna Carta were so specific to the time period that only three remain as law today, but one of them is supremely important: that every person accused of a crime is given due process of the law and judged by a jury of their peers.

So, some of my known grandfathers had a hand in that.  Here are their stories.

Grandpa Willy D’oh is my 26th great grandfather (and you only have 268,435,456 of those).  He was the Lord of Belvoir Castle, a stunning bit of real estate in Leicestershire.  He remained neutral at the beginning of the rebellion, only joining once he saw that the rebels might win.  It’s always smart to hedge your bets if it means losing your head.  Once in, he was all in, going so far as to hold the Rochester castle for the barons in the war that took place after the signing of the charter.  King John’s men did eventually capture him, though, and he was nearly hanged, but he lived on to become a Surety of the Magna Carta, meaning he was one of the twenty-five men who saw to it that it was enforced throughout the land.  He became more of a loyalist during the reign of John’s son, King Henry III, and was a commander for Henry’s army during the Second Battle of Lincoln.  He died in 1236 and was buried in Newstead Abbey in Nottinghamshire, which is best known as the ancestral home of Lord Byron.  I like to think about Byron glancing at my ancestor’s memorial stone in the abbey and having it reappear transformed as an image in Manfred or Childe Harold.

Grandpa Rob Ros is also a 26th great grandfather of mine.  There’s a lot more research to be done on this one because it sounds like he lived a life less ordinary.  First off, he committed some sort of offense that had him arrested by no less a personage than King Richard I, but his first captor handed him over to a second captor who subsequently let Grandpa Rob go free.  The second captor was not so lucky: he was hanged.  Grandpa Rob went on to prosper, however, and was given the barony of Helmsley by King John.  He was therefore loyal to John at first (like Grandpa Willy), and even escorted his father-in-law, my 27th great grandpa William the Lion, King of Scots, to the court of John to swear fealty to the English king.  (Incidentally, William the Lion was great-great grandson to King Duncan of Macbeth fame — a connection that pleases this English/Theater teacher immensely!)  It seems he had a brief period sometime thereafter where he became a monk, but that didn’t last.  This may have been the time when he was one of the Knights Templar.  In any case, he was rewarded for his loyalty to John during the start of the rebellion, but by the end he, too, took on the role of Surety of the Magna Carta and was responsible for watching over Northumberland.  He is entombed in the Temple Church in London, made famous recently by The DaVinci Code.

King John I of England

Don’t look so sad, Grandpa. You did good in the long run.

Grandpa John, like the other two, is a 26th great grandfather of mine.  Okay, okay: I should have probably started with him.  My DNA (from the research I’ve been able to complete) left the lines of succession after John’s grandson, King Edward I.  I’m not going to try to give his bio here — the man was a king, after all: there are hundreds of volumes written about him, far more than I can offer here.  History has not ranked him as one of the better kings, and that reputation doesn’t seem likely to change any time soon.  But, as Hamlet says about his deceased kingly father, “He was a man, take him for all in all, I shall not look upon his like again.”  This day 798 years ago was a bad day for Grandpa John, but it was the dawn of a new day for the rest of us.  It marked a turn in the course of human events.  I’m pretty sure his barons didn’t mean to, but they unwittingly cracked open the doors of democratic rule that allowed the rest of us to bear a share of the power that they alone had wielded for many centuries.  I know you couldn’t have known it at the time, Grandpa John, but you did a far better thing for the world than you could have ever imagined — which is perhaps reason enough to clear some of the blemishes off your reputation.

So Happy Magna Carta Day, everyone!  Here are a few shots of me from last summer in the ruins of a crusader castle in Acre, Israel (where my last Plantagenet ancestor, Joan of Acre, was born).  See any family resemblance? 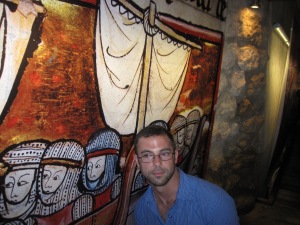 Lost in the melee