“I am the hailstorm that shall break the heads of those who do not take shelter.”
Well.

3. The influence of Savonarola.  Giralomo Savonarola was, strange as it may seem, ahead of his time.  I say ‘strange’ because it’s hard to think of someone who is best known for igniting ‘the bonfire of the vanities’ — whereby he encouraged Florentines to toss into the flames any books or works of art they deemed indecent — as ahead of his times.  And yet, his goal was to cleanse Florence (and Christendom) of corruption; and some of his rhetoric is not so different from what we hear people say about Washington D.C. today.  If he’d have been born about two decades later he would have fought for reform alongside Martin Luther; three centuries later and he would have been a Jonathan Edwards igniting the “Great Awakening” in America.  But, as it happened, he was born into Renaissance Florence. Though he caught the attention of a great many of the citizens who were also fed up with the clerical abuses of the Church, it was a time and place where power was absolute (and held by Pope Alexander VI, a Borgia…not a good enemy to have…) and the Zeitgeist was shifting.  Poet Heinrich Heine famously wrote that “where they have burnt books, they will end in burning human beings.”  In our day and age, this is quote is usually trucked out to sum up the horrors of the Nazis, but it was true long before that, and ironic in this case: Florence’s own book-burners turned out to see the execution by hanging and fire of Savonarola.  It is said that the Florentine crowds shouted curses at him as he mounted the scaffold; after he died from hanging, but before the fire burned his body completely, a burst of heat caused his arm to raise up as if he were blessing the angry mob, at which point many of those yelling curses began to weep.

I’d like my Dante medium rare…with a side of Ovid, per favore. Grazie.

I’ve gone on at length because I was surprised to learn from King’s book that Michelangelo was an ardent supporter of Savonarola (as was Botticelli, who is alleged to have burned some of his own works, although this may be apocryphal).  It seems puzzling at first that an art-maker should be so keen to follow an art-burner, but maybe it speaks to Michelangelo’s melancholic nature and, perhaps, his desire to make the world more beautiful.  Michelangelo was devout, but not a fan of the power structures of the Church.  He didn’t have a lot of love for the Pope or for Rome, and, as King points out, when given full-control over the Sistine Chapel ceiling’s design, he chose somber scenes from the Old Testament of humanity’s transgressions and pain rather than the more uplifting scenes from the New Testament (“No Wedding of Cana or multiplying of loaves in this chapel!”).  Jesus’ ancestors are painted along the perimeter of the ceiling, which was strange subject matter to begin with,  but stranger still was the fact that, rather than painting them as kings and queens, he depicted them as regular people who toiled at work.  In fact, other than the very famous central scene of the creation of Adam, the overall motif of the ceiling is suffering.  Suffering was a favorite theme of Savonarola as well, and his sermons were said to be masterpieces of charismatic oratory on the matter.  Perhaps that’s why Michelangelo seemed to think of him more as a kindred spirit than an enemy.

And #2 in the series of fun facts from Ross King‘s Michelangelo and the Pope’s Ceiling: 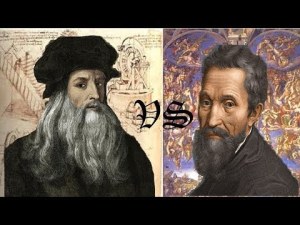 2. The rivalry between Michelangelo and Leonardo (and general rivalries amongst artists).  This one shouldn’t have been surprising, and yet, for some reason, I’ve never thought of Michelangelo and Leonardo crossing paths.  In my head, Da Vinci predated Buonarroti, but that wasn’t the case (although he was more than twenty years older).  As King points out, the two artists had a “well-known dislike of each other.”  Apparently the saucy youth, Michelangelo, taunted Leonardo for failing to properly execute the casting of “a giant bronze equestrian statue in Milan.”  Da Vinci, in rebuttal, lambasted sculpting as a generally lesser art and sculptors — seeing as how they were perpetually covered in marble dust — as dirty.  No wonder all of Florence was abuzz when the two greatest artists of the age were hired to fresco separate walls in a room of the Palazzo della Signoria.  Sadly, for the Florentines yearning for a good fight and the rest of us throughout time who are denied the wonder of what would have surely been a masterpiece of a salon, neither artist successfully executed his fresco: Michelangelo was summoned to Rome by the Pope, and Leonardo’s experimental style didn’t work; he got fed up and went back to Milan.  Still, the book is full of fireworks between Michelangelo and other artists — Bramante, most notably, but he also gets surly with a number of his assistants.  Such, I suppose, is the nature of genius.

As a side note, there was a paragraph in the book that mentioned Michelangelo, Leonardo and Raphael all together.  Because I’m of a certain age, I was really hoping that Donatello would make an appearance and that they would binge eat pizza and say “Cowabunga!”  Sadly, I looked at the index and found that, while he does get mentioned, it isn’t at the same time as the other three.  Drats.

As I mentioned a few days ago, I’m in the midst of reading Ross King‘s Michelangelo and the Pope’s Ceiling in preparation for a trip to Rome in April.  I’ve been keeping a list of fascinating facts as I read, and I was planning to write a Top 5 list when I finished, but I’m halfway through and already the list is long.  So I started to write the Top 5 for the first half, but I hit 1100 words after the first three and decided I’ll just do a separate post for each one to keep it brief(er). 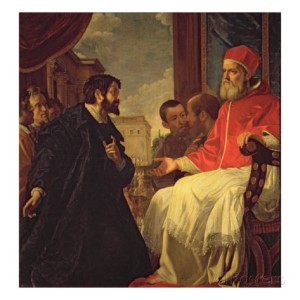 Michelangelo and Pope Julius II on a good day.

1. Relationship with the Pope.  Based on the title of the book, it should be no surprise that there was tension between the artist and the pontiff.  What is surprising is the degree to which the Pope gave in to Michelangelo’s demands.  I mean, Pope Julius II was not the peaceful shepherd that is Pope Francis I.  When Julius wanted to bring the Papal States that had either gone rogue or been taken over by foreign rulers back into his pontifical fold, he sent out an army and rode at the head of it — armed — himself.  They called him the Warrior Pope.  He had a nasty temper and beat messengers who brought him bad news…and sometimes hurt those who brought good news by clapping them on the back with pleasure.  He first brought Michelangelo to Rome to work on his ostentatious tomb, but then he had a change of heart and sent him packing.  And then he wanted him back, but Michelangelo said no.  After several pleas, the Pope finally resorted to an ultimatum, and, reluctantly, Michelangelo returned, but not to resume work on the tomb: he was brought back to to fresco the ceiling of the Sistine Chapel which had been damaged due to a shoddy foundation — despite the fact that he was a sculptor and not a frescoist.  Even so, he agreed.  Not long after he started work, he was forced to get a little testy with the Pope: he told Julius to butt out and stop being such a micromanager.  Said he knew what to paint, and that the Pope was going to have to trust him.  His reputation must have been astounding, because the Warrior Pope did back off.  Later, as the months went by and he couldn’t see the ceiling due to the canvas that stretched across the chapel sixty feet below the workspace (meant to keep any drippings from interrupting a Mass or making a mess), Julius attempted on several occasions to sneak up the scaffolding to get a look at what was going on.  He even donned disguises.  How could such a powerful pope be kept at bay for so long?  Answer: Michelangelo was, oddly, just as powerful.

It has occurred to me that Michelangelo might be my favorite artist.  I’ll be in Rome with students in April, so I’m reading Ross King’s Michelangelo and the Pope’s Ceiling.  I’m loving all the minutiae about the creation of the Sistine Chapel, from detailed information about pigments (did you know ‘ultramarine’ is so called because it describes the place far from the sea (as the name suggests) — Afghanistan! — where the lapis is quarried that’s used to make it), to the political intrigues surrounding Pope Julius II (The Warrior Pope!) and the office politics of the renaissance art world.

Halfway through the book, I realize that I’m enjoying it as much as I am because I love the Sistine Chapel.  I’ve seen it twice in my life and both times I stood there in the crowd, looking up at its immensity and grandeur, and I swooned like the heroine of a Victorian novel; it quite literally took my breath away.  So did the statue of David (and the gallery of figures emerging from the marble leading up to it).  Van Gogh and Chagall rank highly in my esteem as well, but Michelangelo…no lie: I swooned.

And I can’t wait to do it again.

So have you swooned before a work of art?  Even if you haven’t, what would you say is your favorite work and why?