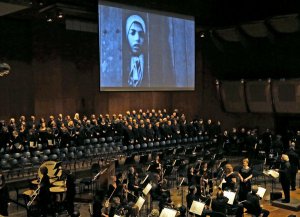 The New York Times has published a preview article about Monday’s performance of the Defiant Requiem (in which I’ll be singing with the Collegiate Chorale).  It’s an interesting read.  It highlights the history that I’ve already touched upon here and here, but it also discusses some of the controversy around the production:

So what moved the historian James Loeffler to condemn “Defiant Requiem,” in a 2013 article in Tablet, a magazine devoted to Jewish life, as an example of a new form of “Holocaust Music”? Such efforts, he wrote, “represent a tragically misconceived approach that distorts the memory of the Holocaust and slights the very musicians that they purport to honor.”

Mr. Loeffler…may be the harshest critic of “Defiant Requiem,” but he is far from the only one.

“A lot of scholars hate the show, the way they did ‘Schindler’s List,’ claiming that it misrepresents or exploits the Holocaust with cheap melodramatic effects,” said Michael Beckerman, a musicologist at New York University who has established a specialty in composers at Terezin. “But this fits into a long tradition of tension between performers and scholars. For some, Murry Sidlin’s interpretation of history would only be right if it looked like a scholarly paper.”

Mr. Loeffler calls “Defiant Requiem” “a virtual multimedia extravaganza,” “replete with factual errors and historical distortions in the name of a theme of spiritual resistance.”

“In some versions,” he adds, “actors reportedly wore striped pajamas — though their real-life models in Terezin did not.”

But Mr. Sidlin makes no great claims to scholarship. “What I wrote,” he said, “was as close as I could get to what the survivors related.”

Besides, he points out, scholars commit inaccuracies, too: “There were never striped pajamas in ‘Defiant Requiem,’ ” he insists, though an illustration on the Lincoln Center website for Monday’s performance shows a conductor wearing them.

“Jews are often accused of going like lambs to the slaughter,” he said. “I wanted to show that this was their way of resisting.”

In grad school I was a teaching assistant for a course on The Holocaust in Literature; that there should be concerns about representation is to be expected — it certainly was the case for nearly every book we read and film we watched in that course –and, I think, largely right.  It would be unethical to put forth artistic work that cheapens, trivializes or profits from the Shoah, but I don’t believe that this production does.   It certainly doesn’t suggest that music saved the day, nor that Terezín/Theresienstadt was anything like the retirement resort that the Nazis sold it as to unsuspecting Jews who unwittingly paid for their train tickets.  It is very clear that the treatment of the inmates there was as sadistic and cruel as in other camps, but that being permitted artistic outlets through music and performance allowed them to hold on to an aspect of their humanity that hadn’t be stripped away.  And, according to some of the survivors who contributed to the project, that bit of time they spent in rehearsal and performance helped many of them to carry on.

I feel honored to participate in the sharing of their story.