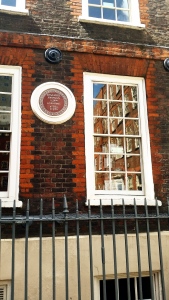 Reader Hampshirehog pointed out that I neglected to mention Samuel Johnson’s cat, Hodge, in the previous post.  I confess this was out of ignorance rather than willful neglect; as I stated in the post, my knowledge of Johnson prior to my visit to his house was practically nil.  I definitely wasn’t aware of the significance of his cat.

But I’ve done my homework now and learned why Hodge has a statue dedicated to him in the courtyard outside the house, and Hampshirehog is right: it’s worth mentioning. Johnson’s love for his cat further illustrates what I wrote about him being ahead of his time.

Apparently it was not common to keep cats as pets in London at the time, but Johnson had a fondness for the felines who lived in the neighborhood.

His biographer, Boswell, noted the following:

Nor would it be just, under this head, to omit the fondness which he showed for animals which he had taken under his protection. I never shall forget the indulgence with which he treated Hodge, his cat: for whom he himself used to go out and buy oysters, lest the servants having that trouble should take a dislike to the poor creature. I am, unluckily, one of those who have an antipathy to a cat, so that I am uneasy when in the room with one; and I own, I frequently suffered a good deal from the presence of this same Hodge. I recollect him one day scrambling up Dr. Johnson’s breast, apparently with much satisfaction, while my friend smiling and half-whistling, rubbed down his back, and pulled him by the tail; and when I observed he was a fine cat, saying, “Why yes, Sir, but I have had cats whom I liked better than this;” and then as if perceiving Hodge to be out of countenance, adding, “but he is a very fine cat, a very fine cat indeed.”

This reminds me of the ludicrous account which he gave Mr. Langton, of the despicable state of a young Gentleman of good family. “Sir, when I heard of him last, he was running about town shooting cats.” And then in a sort of kindly reverie, he bethought himself of his own favourite cat, and said, “But Hodge shan’t be shot; no, no, Hodge shall not be shot.” 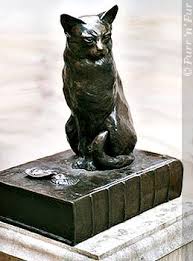 Hodge shan’t be shot; no, no, Hodge shall not be shot.

So not only did Johnson have a modern person’s love for his kitty, he bought oysters for Hodge specifically, and because that act would strike others as odd, he didn’t make his servant – Francis Barber, a former slave – buy them because it would be beneath his station to do so.  Johnson allowed the eccentricity to be his own.  A charming anecdote indeed!

Today Hodge’s statue is a popular point of literary pilgrimage. He’s shown atop Johnson’s Dictionary overlooking a few oyster shells. Visitors will frequently leave coins in the shells for good luck and to pay tribute to Hodge and his quirky, fascinating master.

Every new detail I learn about Johnson makes me more intrigued.

Thanks, Hampshirehog, for bringing this to my attention.