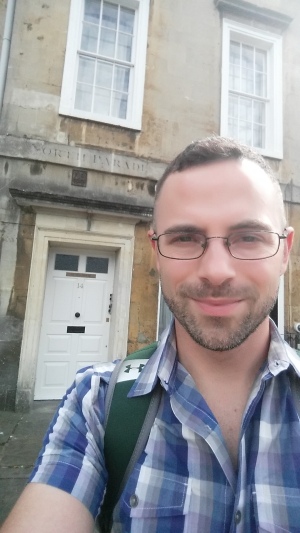 Standing in front of my old flat at Nunes House (14 North Parade) in Bath.

I’ve been an anglophile for as long as I can remember. It may have all started with a book my grandmother gave me about life in the medieval castle when I was five or six, but maybe it started even earlier than that at some time before memory when I first saw Mary Poppins and Bedknobs & Broomsticks and was enchanted by this place that seemed to be dominated by quirky, magical mother figures.

I dreamt of visiting throughout my teens and the day finally came when I was 20 and studied at Advanced Studies in England in Bath. I attended their summer programme which lasted five weeks – clearly not enough time, especially since I spent so much of that time in study.  So, two years later, I applied for their graduate internship, and, after graduation from Denison, moved back to Bath for an entire year.

That year was a transformative one. My first job out of college and I got to work in England as part of a delightfully sharp-witted staff, where I wrote a newsletter for the students and chaperoned their weekend trips all over the UK.  I have never had nor never will have another job that was so perfectly suited to my passions or disposition. 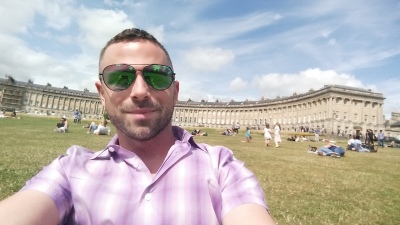 Lounging in front of the Royal Crescent, Bath, on a beautiful, blustery day.

For that reason, I feel as much at home in England as I do in my native Midwest, USofA, and though I say England, I suppose I really mean Bath. After my initial summer experience 17 years ago and my year here in 2000-2001, I’ve come back to visit five times already, which averages to once every three years – and that doesn’t feel like enough.

That was what motivated me to look for study-abroad/professional-development opportunities in the UK, actually, and as soon as I saw the Teaching Shakespeare Through Performance programme listed on the Globe Theatre’s website, I got goosebumps: “That’s it!! That is the perfect programme for me!!” It will finally give me the chance to know London as a resident, even if the time is brief. I’ve only passed through London here and there as a tourist; although I can’t imagine it will win my heart the way Bath has, I’m hoping it will also begin to feel like another of my home bases.

Making new memories (in Tetbury, a town in the Cotswolds) with a dear old friend, Barbara.

It’s funny. I’ve been reading a lot about the Plantagenets in preparation for this trip, and it’s remarkable how much ground those kings and queens covered as they traveled through their realms. “Home” was never a single castle or palace, but one of the many they owned throughout their kingdom which crossed the Channel and included most of western France. For me, home is Cincinnati/Northern Kentucky and the rest of Ohio; New York, New Jersey and Connecticut; and Southwestern England. I own no castles (nor any property at all!) in any of these places, but I own a lifetime of experiences and memories that keep drawing me back to the same haunts and folks again and again, to revisit what was and who we were, and to keep the new experiences coming.

It’s good to be home.

Even the #tulips are sick of #quarantine
Drinking Chile tonight. @drinkchile #carmenere #wine
@bulldog_gin with @fevertree_usa Sparkling Lemon; tastes like a warm Spring Saturday afternoon! (Ignore garlic, onion & potatoes...they're there to enliven the still life)
Only thing better than taking your students to see a play at @lctheater (@greatsocietybwy ) that features a terrific actor you're lucky enough to be performing with at @carnegiehall (@thebrycecapades ) the next day? Seeing an ad for your upcoming performance in the @playbill of said show! Come see @mastervoicesny put on the #Gershwins #LetEmEatCake! https://www.mastervoices.org/events/let-em-eat-cake/
#Sunday = #RoastChicken
First came across #SaltFatAcidHeat at an airport bookstore a couple years ago; I remember taking a picture of it in order to look it up later...but then I didn't. Then @ciaosamin 's @netflix series came on and I loved it, but I still didn't have the book. Finally bought it recently and - wow! - as much as I enjoyed the show, this is so much more informative and insightful (although I do miss the incredible cinematography). Reading it in bed with a glass of #montepulcianodabruzzo and some parmesan (Samin, this has become one of my favorite snacks after your "Salt" episode!)
A wonderful Halloween party at @madeleinespetitparis ! Left with first prize and a bottle of #champagne!
Defied gravity and my curfew last night taking students to see @wicked_musical , but it was worth the saggy eyes I had today getting to see their reactions. #broadwaybridges @broadwayleague
Really enjoyed seeing @jerseyboysbroadway this past weekend -- been a few years since the last time. Family visiting from the Midwest thought it was fantastic!