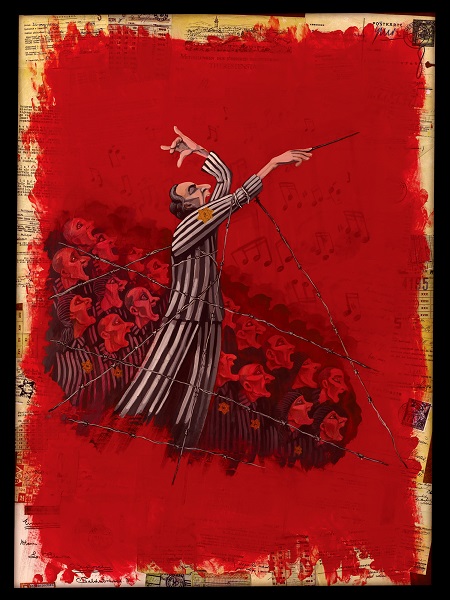 Please read this excellent post on the Defiant Requiem from Janet Pascal, my colleague from the Collegiate Chorale.  The Defiant Requiem presents Verdi’s Requiem in a way that honors the lives and courage of the chorus in the Terezín concentration camp led by Rafael Schächter; by doing so it allows today’s audience to contemplate the salvific power of music and art in a time marked by unbridled cruelty.  In Janet’s words:

…[The] Verdi Requiem is simply a magnificent and emotionally fulfilling work. All of us who sing in The Chorale know how singing such a masterpiece can fulfill a need that runs as deep as hunger or grief. And what we get from the music can only be a pale reflection of what it had to offer people in such extreme and desperate need. The pianist Edith Steiner-Kraus, who survived the camp, explained this to [Defiant Requiem conductor] Murry Sidlin in words that cannot be bettered: “We had returned to the source of the music—we were so far inside the genesis of the music that we were at Verdi’s table. . . .You’ll never understand, or get close, to what music truly meant to each of us as a sustaining power and as a way of using our skills to inspire—beyond criticism—beyond any superficial evaluation—we were music.”

The performance will be on Monday, March 9th, at the Lincoln Center (Avery Fisher Hall).  Tickets are still available.

*The image belongs to the Defiant Requiem Foundation.