In 2012 I was sitting on the beach in Tel Aviv with two friends from the Collegiate Chorale.  We performed with the Israel Philharmonic for three weeks that summer, and on this evening early in the tour the three of us were drinking wine at one of the open air bars scattered along the coast and talking about…(wait for it…)…Alexander Hamilton.  One of my compatriots had recently finished the Ron Chernow biography and was clearly excited to share what she’d learned.  She told us of his exploits with a beaming air, as if he were her own son.  Hamilton, she said, was far and away her favorite Founding Father.

This struck me for two reasons.  First, my friend is Syrian by birth, educated in Europe, now an American, and she is so passionate about history that she has a favorite Founding Father.  Which prompted my second thought: my DNA arrived on American soil in the mid-1600s, long before Hamilton & Co. were even born, and yet I’d taken their contributions for granted.  I know that’s common: when we study history in schools, everything that happened in the past feels like a foregone conclusion.  It’s only as an adult that I began to realize that none of it has ever been preordained and that the present could have been very different.  Even so, I have to admit I was a little bit ashamed for not having a favorite Founding Father myself, especially considering I grew up in Cincinnati, which is in Hamilton County, which is named for that same Hamilton (a fact I didn’t realize until I read the biography; no one ever told me and I never thought to ask).  In that moment, in Tel Aviv, it seemed as though a fave Founder was something one ought to have. 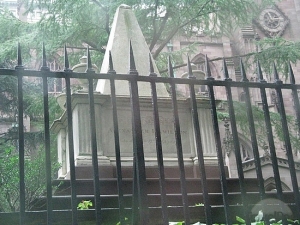 Hamilton’s grave at Trinity Church in the Financial District in NYC. I always make a point of visiting him when I’m in the area.

Naturally, then, I started reading the book as soon as I got home from the trip.  It was immediately clear why she’d been so drawn to him.  His biography is like something out of Dickens: a ragamuffin West Indian kid grows up on the wrong end of town with a cast of colorful characters, moves forward in life by impressing the right people with his wit and scrappy intelligence, makes his way to New York to study, finds himself hobnobbing with the elite, eventually becomes Washington’s most trusted aide.  He also happens to be the father of modern finance and was one of the very first prominent abolitionists.  And all of this is only the tip-of-the-tip of the iceberg.

And now, two centuries after his death from dueling Vice President Aaron Burr, he’s one of the hottest characters on Broadway. Since he’s now my favorite Founding Father, too, I was both shocked and excited to read about Hamilton the musical.  Lin-Manuel Miranda, creator of In the Heights, was also moved and impressed by the Chernow biography and turned Hamilton’s story into a hit show that’s got both Stephen Sondheim and Andrew Lloyd-Webber singing its praises.  A quick search turned up this fantastic video from a performance by Miranda at the White House in 2009.  No doubt the piece he performs has gone through many changes before finally making it to New York, but if the show in its current form is anything like this recording then my guess is that Sondheim and Lloyd-Webber weren’t just being nice.  It’s sold out through April, but I’m going to do my best to get $20 tickets in the lottery.  I’ll report back if that actually happens.

(ps: Who is your favorite Founding Father?)

2 thoughts on “Alexander Hamilton: the Man, the Book, the Musical”