On to my wine homework.

As stated in the previous post, the first quality that I want to explore is connectedness.  Admittedly, the post about Rioja already addressed this to a degree: its connection to Spain and Spanish culture is what led to my Aha! wine moment. But MacNeil‘s the expert, and if she says I should get to know this quality through a Mosel riesling, then I’m sure as heck gonna try. 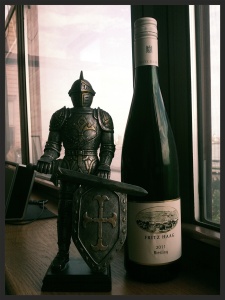 Knight I bought in Salzburg guarding the Fritz Haag Riesling

The riesling I chose was a 2011 Fritz Haag, a wine I picked more or less at random in the store but was happy to find that it’s one of MacNeil’s Mosel-Saar-Ruwer “wines to know.”  She writes, “The wines that Fritz Haag makes from the incredible sundial — Sonnenuhr — vineyard located above the village of Brauneberg are, year in and year out, classic examples of perfect Mosel riesling.”  Praise indeed.

Here is my impression.  The wine has a flirty blonde color that I’ve notice is common to rieslings I’ve tried — not yellow like some chardonnays, but flaxen.  It’s nose was harder to describe, and all I can really come up with is this: fresh air.  It’s getting humid here in the NYC tri-state area, but when I stuck my nose in a glass of this riesling, it was like a cool dry Spring day with highs in the 70s (or 20s in centigrade; this is a European wine, after all…).

If its fragrance was Spring, its taste was pure Winter — breathing in deeply on a day that’s below freezing.  And peaches.  Underripe, when the texture of the peach is hard and harsh, but the taste — what little there is — is crisp, clean and a little tart.  Finally, (and this is probably a bit of a sacrilege, but I’ll write it anyway), it tasted a bit like a Radler, a mixture of a lager and Sprite common to Germanic lands and perfect for a workday lunch.

So how does any of this bring to mind the Mosel region and the wine’s connection to it?

Well, to get there, I have to travel by way of autobiography.  I grew up in Cincinnati, a city whose seasonal extremes have led me to say frequently that it’s the hottest and the coldest place I have ever been.  All of my descriptors above are references to the seasons of Cincinnati, which, as it happens, sits along a river not unlike the Mosel.  In fact, whatever quirks and idiosyncratic delights that Cincinnati may boast are usually traceable to the people’s German heritage, from our breweries to our Schützenfesten to saying “please?” quizzically when we don’t understand what you’ve said (the German equivalent of “bitte?”).  You can still attend mass in German if you visit Over-the-Rhine, a neighborhood whose hillside position overlooking the Ohio River reminded its settlers of home.  Most high schools in Cincinnati offered German until recently (which is why yours truly studied the language from 7th through 12th grades).

I’ve never been to the Mosel, but I’ve spent some time now reading about it and looking up pictures online.  It feels like home.  It came up in conversation recently: a friend is planning to ride his bike there, stopping occasionally at this vineyard and that, drinking riesling all week.  It never occurred to me to do that, but now that it has, it’s the top of my travel list.

Fritz Haag’s website revealed to me that their wines were beloved by Thomas Jefferson and Napoleon alike.  I spent a big chunk of the Fall reading a biography of Alexander Hamilton that featured Jefferson prominently (because they hated one another), and I’m currently writing a screenplay that is about Napoleon and what he means to the people of Sandusky, Ohio (kind of).  In fact, I have a few Napoleonic blogposts fomenting in my head as l’Empereur determines exactly what I should write.  I’ve also been commissioned this week to write a destination travel piece on Frankfurt, the largest city in Hesse and not far from the Mosel region….

I still haven’t answered how this riesling is connected to the Mosel.

And I’m sorry, Karen MacNeil, but I can’t, not really.  Not without having been there to taste it where it was grown and produced.  Your book tells me it takes on the flavor of the minerals in the slate that it grows from, and I believe you, but I can’t pick those notes out yet.

The connectedness that I’m experiencing right now is my own connection — through the wine — to historical figures I admire, to my childhood and memories of playing outdoors in Summer, to Germany and my immigrant great-great-great grandparents I never knew, to a man named Fritz Haag and his son (grandson?) Oliver who currently runs the winery and wears similar glasses to my own.  These men have created a wine that’s set loose my fancy and let it fly; when I take that bike trip, I’m definitely going to look them up.

It’s not the kind of connectedness that I was aiming to experience, but it’s more than I got from drinking my daily Diet Coke at lunch — would it were a Radler!

Only thing better than taking your students to see a play at @lctheater (@greatsocietybwy ) that features a terrific actor you're lucky enough to be performing with at @carnegiehall (@thebrycecapades ) the next day? Seeing an ad for your upcoming performance in the @playbill of said show! Come see @mastervoicesny put on the #Gershwins #LetEmEatCake! https://www.mastervoices.org/events/let-em-eat-cake/
#Sunday = #RoastChicken
First came across #SaltFatAcidHeat at an airport bookstore a couple years ago; I remember taking a picture of it in order to look it up later...but then I didn't. Then @ciaosamin 's @netflix series came on and I loved it, but I still didn't have the book. Finally bought it recently and - wow! - as much as I enjoyed the show, this is so much more informative and insightful (although I do miss the incredible cinematography). Reading it in bed with a glass of #montepulcianodabruzzo and some parmesan (Samin, this has become one of my favorite snacks after your "Salt" episode!)
A wonderful Halloween party at @madeleinespetitparis ! Left with first prize and a bottle of #champagne!
Defied gravity and my curfew last night taking students to see @wicked_musical , but it was worth the saggy eyes I had today getting to see their reactions. #broadwaybridges @broadwayleague
Really enjoyed seeing @jerseyboysbroadway this past weekend -- been a few years since the last time. Family visiting from the Midwest thought it was fantastic!
Thoroughly enjoyed seeing Betrayal last week (@betrayalbwy ). Bravi tutti: @twhiddleston , @_charliecox & @zawe !!
Finally got a chance to crack open America's @testkitchen Mediterranean cookbook: sauteed chicken breasts with cherry tomatoes, zucchini and yellow squash (p. 292). Substituted the squash with red & green bell peppers and an onion, but otherwise followed the recipe and it was delicious. Paired with a #CotesduRhone because I like it (@familleperrin )
Clair de lune. #hudsonriver #hudsonyards #iheartnewyork